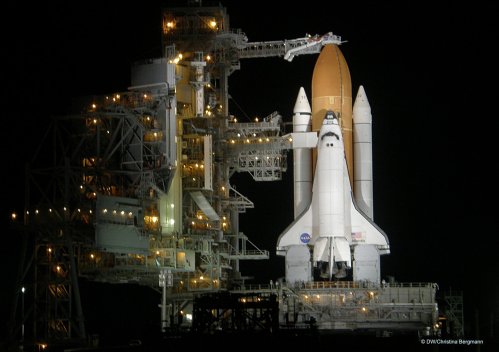 The 50th anniversary of the Apollo 11 mission and the first moon landing on this day in 1969 brings back memories of one of my favorite topics as a reporter in the US: NASA’s Space Shuttle program. I was fortunate enough to visit the astronaut training site in Houston, Texas, as well as the Kennedy Space Center in Florida, meet many astronauts, and watch the final mission take off.

My first trip to the Kennedy Space Center, to be honest, was quite stressful and disappointing at the same time: Space Shuttle Atlantis was scheduled to lift off on December, 6, 2007. An excited reporter had traveled to Florida to bear witness and take note. However, Atlantis had problems with a fuel tank sensor, and after several days of delay, we were notified that the launch date had been pushed to January – after days of speculations and press conferences that were rescheduled by the hour. Time to go home to DC. But I had nevertheless enjoyed the atmosphere, especially since we reporters had gotten a tour to see the shuttle at night. (picture above)

Four years later, I traveled back to the Kennedy Space Center. This time, because the Shuttle program was coming to an end. In June of 2011, I went to Titusville and the Space Center in Florida to talk to the people who, with their effort and dedication, had made the Shuttle Program a success. They were sad, but still busy preparing the last launch, and diligently doing their job.

And they took me behind the scenes, where the transition program had begun, while the preparations for the final Space Shuttle voyage were under full swing.

The three already retired shuttles – Discovery, Endeavour and Enterprise – were stripped of all dangerous and valuable materials, so they could be transported to their final destinations in museums across the US.

I traveled back to see the launch – and finally did get to see Atlantis lift off:

With that last mission, the US ceased to be able to transport astronauts into space. Since 2011, they’ve had to rely on the Russians to do the job. The manned space flight program has been moved to the private sector, with billionaire Elon Musk’s Space X in the lead. The program has had some successes and some failures, but astronauts are already standing by to go back to space soon.

For my reporting, I did get to meet many astronauts in person, then-active or retired, like the German Hans Schlegel, who was on that STS-122 mission in 2007, or Col. Catherine “Cady” Coleman (Ret., USAF), who was aboard the Shuttle Columbia in 1995 and 1999. To me, they all are heroes, and what is more, always nice, cool, calm and collected. Just like their predecessor, and the most famous of them all: Buzz Aldrin, Apollo 11 veteran, and the second man on the moon.