More reports written by the young journalists of Seitz Elementary. (For privacy reasons, the students’ names are not published.)

Have you ever wondered how Seitz got its name or why the symbol is a dragon? Keep on reading to find out!

General Seitz was a Lieutenant General in the Army. His paratrooper team was the 517th. General Seitz was born in February 18, 1918, in Kansas. He had 3 brothers and 4 sisters in the family. General Seitz joined the Army when he was 23. When he was in the Army, he was a paratrooper which meant he jumped out of planes. In 1975 he retired as a Lieutenant General. When he retired he started doing a lot of volunteer work, he was also one of the people who convinced the army to build the school.

“They named a school after him because he was a loving man.”

Rick Seitz was General Seitz’ son, and I quote: “I am very proud of my father”, said Rick Seitz. General Seitz once said “The children are our most important assets.” He died June 8, 2013.

Richard J. Seitz Elementary has many things that make it unique. For example we have an amazing principal and vice principal. We have awesome teachers and students. But one of the most cherished persons here is General Seitz. He believed that you learn something every day and that your education is very important. And he has made his son very proud because of the things he did with his life. But sadly Lt General Richard J. Seitz at the of 95 completed a wonderful and story filled life on June 8, 2013 after suffering congestive heart failure. And although he was strict he is just like this school: Kind and caring.

The Man who could do anything 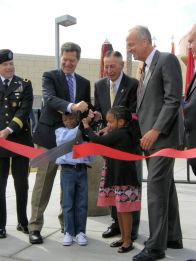 Lieutenant General Richard J. Seitz, the man who could do anything. He even jumped out of planes! He was a noble man, without a doubt. He loved to work out. He also liked golf, badminton, and tennis. He taught his kids how to play tennis, too. He was firm, but also very kind, so he took time to help out his son. He was significant to everyone around him. He called everybody he met “sir”. Seitz was continuously doing deeds to support other individuals. But most of all, he was a real practical joker. Seitz had a sense of humor that anyone could laugh to!

Lieutenant General Seitz always had a desire for education, so he supported building a new school. After one and a half years of exhausting construction, a school was built under the name, Richard J. Seitz Elementary. Many people assisting with the construction were justifiably gratified, especially Seitz.

“While he was in the Army his symbol was a dragon that’s why we are Seitz Dragons.”