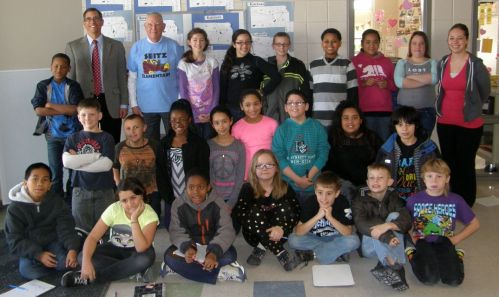 It was a challenging task. After three days of learning about journalism and even participating in a “press conference”, the Fifth Graders at Seitz Elementary in Fort Riley, KS, were asked to write a news story themselves. The topic: The person their school is named after, General Richard J. Seitz. They did a great job, remembering to use quotes from the press conference with the general’s son Rick and his nephew John, to pay attention to the details and to start with a “hook”.

Here is the second collection of some of their reports, some complete, some only with a few sentences.

(For privacy reasons, the students’ names are not published.)

Do you know a lot about Richard J. Seitz?

Richard J. Seitz was born in Leavenworth, KS, on February 18, 1918. He enjoyed helping others in getting involved in community activities. Richard went to Kansas State University (KSU). While he was there he met his first wife Bettie. Unfortunately she died of a heart attack. He missed her but kept on going, then he met his second wife Ginny. 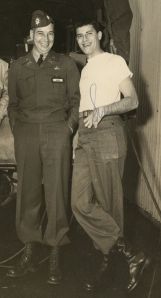 At age 22 he was dragged into the Army. Rick Seitz, his son, said: “My dad won World War II and the Vietnam War big time.” After the wars he just kept on going but when he was done with the Army, he retired. Richard liked to pull pranks. Rick said that “my dad told my sisters he was getting a motorcycle at the age of 94.” So then Rick and Richard Seitz went to a Harley-Davidson dealer and Richard got on a motorcycle and Rick took a picture and sent it to his sisters. “They were shocked”, said Rick.

He supported the Army to build a school because he thought education was the most important thing for adults and children. Richard liked to bring chocolates and apples for the teachers, and a book to read to the students when he was there. To honor him they named the school after him: “Seitz Elementary”. Rick said: “It turned out to be an amazing school”, and John said: “The teachers are a lot nicer and it is a school that my uncle Richard Seitz loved”.

Our mascot is a dragon because when General Seitz was in the Army his unit patch was a dragon on his left arm.

Richard J. Seitz aka (also known as) General Seitz died on June 8, 2013, but he enjoyed his life and everyone in Seitz Elementary cared and loved him! May he forever be loved and be in peace.

“What do you miss most about your dad?” asked by Seitz student. “Well…” Rick Seitz said, “I miss how I always used to call him and tell him about the good things I did.” 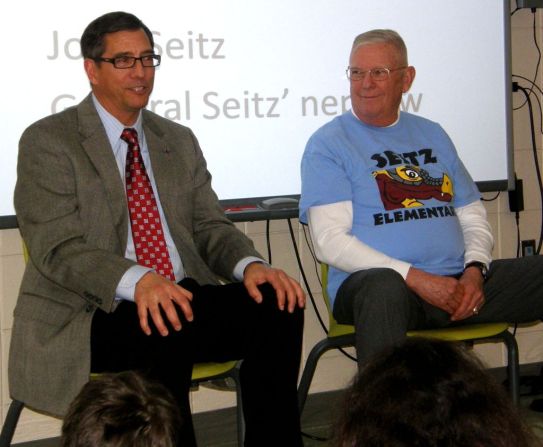 Rick and John Seitz at the “press conference” at Seitz Elementary

Yesterday, I interviewed Rick Seitz and John Seitz that where close to General Seitz who made Seitz Elementary.

Some people know that Seitz died of heart failure. He lived 35 years and died in 2013. Then on February 13th, 2014, the classes got to interview Rick and John Seitz.  Many asked a lot of questions and got answers. General Seitz was born on February 18th. Rick was Seitz’ son and he was born in 1956. General Seitz’ nephew John Seitz was born in 1937. Rick has three sisters, one is a twin in California and one is in Virginia and one is somewhere else. General Seitz had two wives but both died. Seitz went to college at Kansas State. He built Seitz because he realized he really loved kids. He went to the Army when he was 22 years old. He came to assemblies at Seitz Elementary and loved it. His hobby was to give speeches. He and his nephew John Seitz exercised in the YMCA! Rick Seitz loved to take trips with his dad all the time.

Rick went to college in Kansas. He was 21 when he graduated from Kansas State. He would always call his dad when he did something good.

Rick Seitz had to move lots of places. He moved to Brazil, Fort Bragg, and he moved to Kansas twice.

Richard was born 1918. He was 22 when he joined the Army. He was part of the airborne paratroopers. He had to parachute all the way from an airplane. Just to fight in World War II he flew all the way to France. After the war ended he stayed just long enough to marry someone. Richard Joe Seitz died at the age of 95. He died from heart failure.