(For privacy reasons, the students’ names are not published.)

Did you know Richard Seitz woke up at 4.00 every morning and swam and exercised?

When Richard was 22 years old he was forced into the army by World War II. Then after that his dad convinced him to stay in the Army and he did. Then he became a 3 star General. In 1975 he retired from his 35 year career which was supposed to be only four years. Then later on he went to Vietnam and survived. Then after World War II he went to Paris and married his first wife.  Then he had his son Rick Seitz. The games that he played had to deal with his shepherd dog black dog black and Richard Seitz would get down on his knees and Rick would get on his dad’s back and Richard would chase the dog around.

Richard had a dad, a mom, four sisters and three brothers. He also had three dogs and married twice.

“He married a lady. She was involved with the Red Cross.”

On his free time, he liked to exercise. His favorite season is football and baseball season.

And he says, “education for young people is important because with that we can do anything and whatever we want to do.”

His medals and badges in the army are: He got Distinguished Service Medal, Silver Star, Legion of Merit, Bronze Star Medal, Air Medal, Purple Heart, Combat Infantry  Badge, Master Parachutist Badge and Rigger Badge. He taught at the Army Parachute School for three years. He taught people how to jump out of planes. In his military service he moves all over the world.

He gravely cared about the Army.

And when he was talking to people no matter what he called them “sir”. He always helped people.

The Man Who could do anything

Lieutenant General Richard J. Seitz, the man who could do anything. He even jumped out of planes! He was a noble man, without a doubt. He loved to work out. He also liked golf, badminton, and tennis. He taught his kids how to play tennis, too. He was firm, but also very kind, so he took time to help out his son. He was significant to everyone around him. He called everybody he met “sir”. Seitz was continuously doing deeds to support other individuals. But most of all, he was a real practical joker. Seitz had a sense of humor that anyone could laugh to! 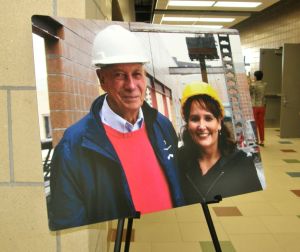 Lieutenant General Seitz always had a desire for education, so he supported building a new school. After one and a half years of exhausting construction, a school was built under the name,Richard J. Seitz Elementary. Many people assisting with the construction were justifiably gratified, especially Seitz.

General Seitz admired the military. He was a battalion commander in the 517th parachute regimental combat team. He got the chance to jump high out of the sky out of airplanes. Seems fun, doesn’t it, thousands of feet in the air with only a parachute to save you? He was tall, brave, and ready for anything. He served in the military for about 35 years, he retired in 1975.